There are times when one equilibrium reaction does not adequately describe the system being studied. Sometimes we have more than one type of equilibrium occurring at once (for example, an acid-base reaction and a precipitation reaction).

The ocean is a unique example of a system with multiple equilibria, or multiple states of solubility equilibria working simultaneously. Carbon dioxide in the air dissolves in sea water, forming carbonic acid (H2CO3). The carbonic acid then ionizes to form hydrogen ions and bicarbonate ions \(\ce{(HCO3- )}\) , which can further ionize into more hydrogen ions and carbonate ions \(\ce{(CO3^2- )}\):

The excess H+ ions make seawater more acidic. Increased ocean acidification can then have negative impacts on reef-building coral, as they cannot absorb the calcium carbonate they need to grow and maintain their skeletons (Figure \(\PageIndex{1}\)). This in turn disrupts the local biosystem that depends upon the health of the reefs for its survival. If enough local reefs are similarly affected, the disruptions to sea life can be felt globally. The world’s oceans are presently in the midst of a period of intense acidification, believed to have begun in the mid-nineteenth century, and which is now accelerating at a rate faster than any change to oceanic pH in the last 20 million years.

Figure \(\PageIndex{1}\): Healthy coral reefs (a) support a dense and diverse array of sea life across the ocean food chain. But when coral are unable to adequately build and maintain their calcium carbonite skeletons because of excess ocean acidification, the unhealthy reef (b) is only capable of hosting a small fraction of the species as before, and the local food chain starts to collapse. (credit a: modification of work by NOAA Photo Library; credit b: modification of work by “prilfish”/Flickr).

Learn more about ocean acidification and how it affects other marine creatures.

Slightly soluble solids derived from weak acids generally dissolve in strong acids, unless their solubility products are extremely small. For example, we can dissolve CuCO3, FeS, and Ca3(PO4)2 in HCl because their basic anions react to form weak acids (H2CO3, H2S, and \(\ce{H2PO4-}\)). The resulting decrease in the concentration of the anion results in a shift of the equilibrium concentrations to the right in accordance with Le Châtelier’s principle. 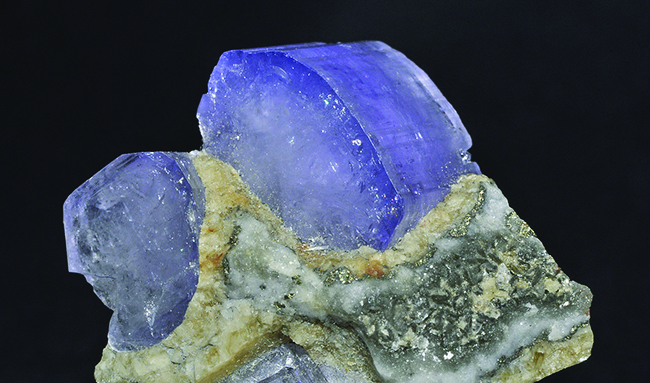 Figure \(\PageIndex{2}\): Crystal of the mineral hydroxylapatite, Ca5(PO4)3OH, is shown here. Pure apatite is white, but like many other minerals, this sample is colored because of the presence of impurities.

These reactions decrease the phosphate and hydroxide ion concentrations, and additional hydroxylapatite dissolves in an acidic solution in accord with Le Châtelier’s principle. Our teeth develop cavities when acid waste produced by bacteria growing on them causes the hydroxylapatite of the enamel to dissolve. Fluoride toothpastes contain sodium fluoride, NaF, or stannous fluoride [more properly named tin(II) fluoride], SnF2. They function by replacing the OH– ion in hydroxylapatite with F– ion, producing fluorapatite, Ca5(PO4)3F:

The resulting Ca5(PO4)3F is slightly less soluble than Ca5(PO4)3OH, and F– is a weaker base than OH–. Both of these factors make the fluorapatite more resistant to attack by acids than hydroxylapatite. See the Chemistry in Everyday Life feature on the role of fluoride in preventing tooth decay for more information.

As we saw previously, fluoride ions help protect our teeth by reacting with hydroxylapatite to form fluorapatite, Ca5(PO4)3F. Since it lacks a hydroxide ion, fluorapatite is more resistant to attacks by acids in our mouths and is thus less soluble, protecting our teeth. Scientists discovered that naturally fluorinated water could be beneficial to your teeth, and so it became common practice to add fluoride to drinking water. Toothpastes and mouthwashes also contain amounts of fluoride (Figure \(\PageIndex{3}\)).

Unfortunately, excess fluoride can negate its advantages. Natural sources of drinking water in various parts of the world have varying concentrations of fluoride, and places where that concentration is high are prone to certain health risks when there is no other source of drinking water. The most serious side effect of excess fluoride is the bone disease, skeletal fluorosis. When excess fluoride is in the body, it can cause the joints to stiffen and the bones to thicken. It can severely impact mobility and can negatively affect the thyroid gland. Skeletal fluorosis is a condition that over 2.7 million people suffer from across the world. So while fluoride can protect our teeth from decay, the US Environmental Protection Agency sets a maximum level of 4 ppm (4 mg/L) of fluoride in drinking water in the US. Fluoride levels in water are not regulated in all countries, so fluorosis is a problem in areas with high levels of fluoride in the groundwater.

If calcium carbonate is added to a concentrated acid, hydronium ion reacts with the carbonate ion according to the equation:

(Acid rain is usually not sufficiently acidic to cause this reaction; however, laboratory acids are.) The solution may become saturated with the weak electrolyte carbonic acid, which is unstable, and carbon dioxide gas can be evolved:

Two equilibria are involved in this system:

and calculate the concentration of hydronium ion required to prevent the precipitation of ZnS in a solution that is 0.050 M in Zn2+ and saturated with H2S (0.10 M H2S).

Therefore, precise calculations of the solubility of solids from the solubility product are limited to cases in which the only significant reaction occurring when the solid dissolves is the formation of its ions.

Two equilibria are involved when AgBr dissolves in a solution containing the \(\ce{S2O3^2-}\) ion:

What is the effect on the amount of solid Mg(OH)2 that dissolves and the concentrations of Mg2+ and OH– when each of the following are added to a mixture of solid Mg(OH)2 in water at equilibrium?

The equilibrium among solid Mg(OH)2 and a solution of Mg2+ and OH– is:

(a) The reaction shifts to the left to relieve the stress produced by the additional Mg2+ ion, in accordance with Le Châtelier’s principle. In quantitative terms, the added Mg2+ causes the reaction quotient to be larger than the solubility product (Q > Ksp), and Mg(OH)2 forms until the reaction quotient again equals Ksp. At the new equilibrium, [OH–] is less and [Mg2+] is greater than in the solution of Mg(OH)2 in pure water. More solid Mg(OH)2 is present.

(b) The reaction shifts to the left to relieve the stress of the additional OH– ion. Mg(OH)2 forms until the reaction quotient again equals Ksp. At the new equilibrium, [OH–] is greater and [Mg2+] is less than in the solution of Mg(OH)2 in pure water. More solid Mg(OH)2 is present.

(c) The concentration of OH– is reduced as the OH– reacts with the acid. The reaction shifts to the right to relieve the stress of less OH– ion. In quantitative terms, the decrease in the OH– concentration causes the reaction quotient to be smaller than the solubility product (Q < Ksp), and additional Mg(OH)2 dissolves until the reaction quotient again equals Ksp. At the new equilibrium, [OH–] is less and [Mg2+] is greater than in the solution of Mg(OH)2 in pure water. More Mg(OH)2 is dissolved.

(d) NaNO3 contains none of the species involved in the equilibrium, so we should expect that it has no appreciable effect on the concentrations of Mg2+ and OH–. (As we have seen previously, dissolved salts change the activities of the ions of an electrolyte. However, the salt effect is generally small, and we shall neglect the slight errors that may result from it.)

Thus, changing the amount of solid magnesium hydroxide in the mixture has no effect on the value of Q, and no shift is required to restore Q to the value of the equilibrium constant.

What is the effect on the amount of solid NiCO3 that dissolves and the concentrations of Ni2+ and \(\ce{CO3^2-}\) when each of the following are added to a mixture of the slightly soluble solid NiCO3 and water at equilibrium?

no effect except to increase the amount of solid \(\ce{NiCO3}\)

Several systems we encounter consist of multiple equilibria, systems where two or more equilibria processes are occurring simultaneously. Some common examples include acid rain, fluoridation, and dissolution of carbon dioxide in sea water. When looking at these systems, we need to consider each equilibrium separately and then combine the individual equilibrium constants into one solubility product or reaction quotient expression using the tools from the first equilibrium chapter. Le Châtelier’s principle also must be considered, as each reaction in a multiple equilibria system will shift toward reactants or products based on what is added to the initial reaction and how it affects each subsequent equilibrium reaction.