Although the delocalized pi electrons in aromatic rings are much less reactive than those in isolated or conjugated alkenes, they can undergo electrophilic reactions given a powerful enough electrophile.  Electrophilic addition to aromatic double bonds, however, is not generally observed - this would be energetically unfavorable because it would result in a loss of aromaticity in the product. Rather, aromatic double bonds undergo electrophilic substitution reactions, (abbreviated SEAr), which are mechanistically very similar to the substitutive addition-elimination reactions of alkenes. The product of an SEAr reaction, like the starting compound, is aromatic.

Because the starting point in an SEAr reaction is inherently low in energy (due to aromaticity), the activation energy for the first electrophilic step - in which aromaticity is temporarily lost in the carbocation intermediate- is correspondingly high.  This is why aromatic pi bonds are significantly less reactive in electrophilic steps compared to the π bonds of nonaromatic alkenes. As a consequence, SEAr reactions  tend to share two basic characteristics.  First, the electrophilic partner needs to be highly reactive -this serves to increase the energy of the starting point and decrease the activation energy.  As we will soon see, the electrophile in an enzymatic SEAr reaction is usually a carbocation.

A second common characteristic that we will see in many SEAr reactions is that the aromatic substrate is often activated by the presence of one or more electron-donating heteroatom-containing substituents.

The heteroatom - generally a nitrogen or an oxygen - stabilizes the positive charge on the intermediate, which by Hammond's postulate (section 6.2) also lowers the energy of the transition state and therefore the activation energy. 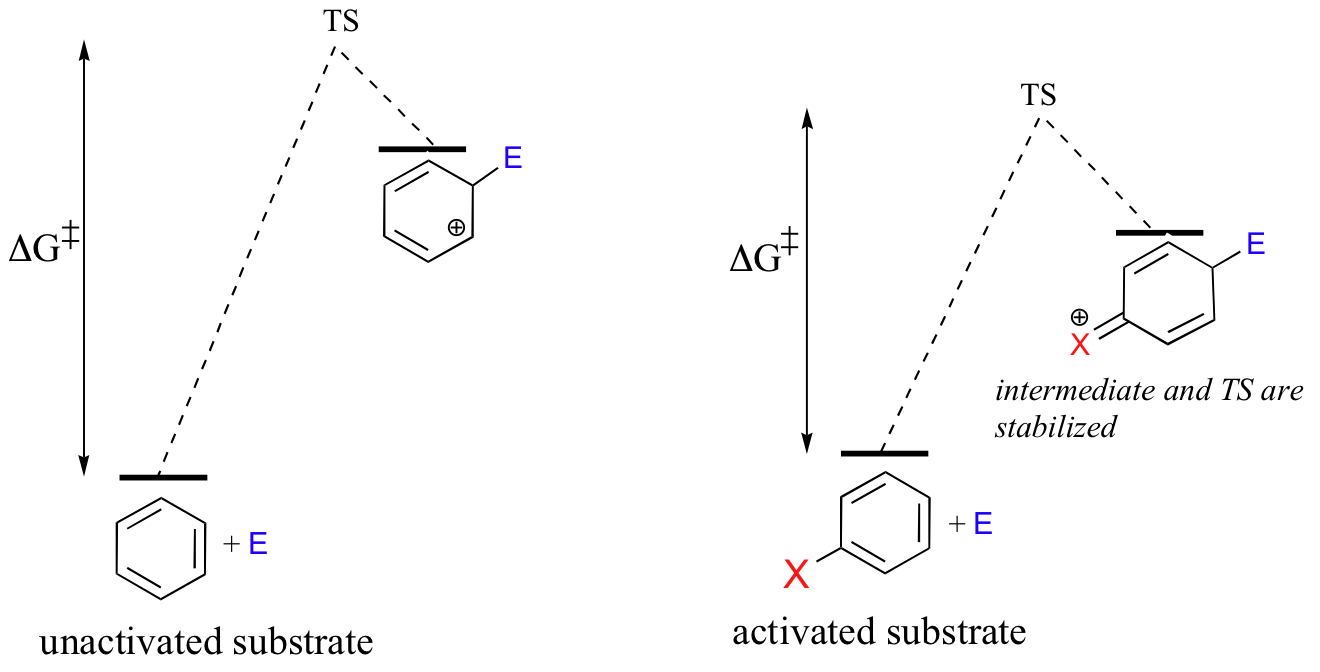 An example of an SEAr reaction can be found in the biosynthetic pathway for a kind of compound found in fungi called 'ergot alkaloids' (the term 'alkaloid' refers to a diverse family of amine-containing biomolecules, and 'ergot' is a type of fungus). These alkaloid compounds in fungi often have potent hallucinogenic effects when ingested by humans.  In an interesting historical note, it has been speculated that the bizarre behavior of some of the young women accused in the Salem witchcraft trials may have been caused by their accidental consumption of fungus-tainted grain.

A key step in fungal alkaloid biosynthesis is a condensation between the aromatic side chain of the amino acid tryptophan and dimethylallyl diphosphate, the isoprenoid building block molecule we have seen several times already (J. Am. Chem. Soc. 1992, 114, 7354).

Note that the electrophile (intermediate A) is an allylic carbocation, and that carbocation intermediate B is stabilized by resonance with the ring nitrogen on tryptophan.

In a similar reaction, an isoprenoid chain is transferred to a phenol ring as part of the biosynthesis of vitamin K and related biomolecules. In this example, carbocation intermediate B is stabilized by resonance with the electron-donating phenol oxygen. Yet another example of a SN1-like SEAr reaction is found in the biosynthetic pathway for vitamin B12.  The electrophile is generated by loss of ammonia (instead of pyrophosphate as in the previous examples) from the first of two substituted aromatic rings:

This carbocation electrophile (intermediate A) is then attacked by the pi bonds of a second aromatic ring.  Notice that the positive charge on both intermediates A and B in this condensation reaction are stabilized by the nitrogen atoms in their respective aromatic rings. In chapter 14, we saw how the coenzyme pyridoxal phosphate (PLP) assists in the catalysis of a variety of reaction types.  Here is one more to add to the list: in the final step in the biosynthesis of the amino acid tryptophan, PLP participates in an SEAr condensation.  The early phase of this reaction is something that we have already seen when we discussed the PLP-dependant reaction catalyzed by serine dehydratase (section 14.3F).

The aminoacrylate-PLP adduct, which can be thought of as a resonance stabilized carbocation, is the electrophile in the subsequent SEAr condensation with indole (steps 1 and 2 below): The reaction is completed upon protonation (step 3) and release of tryptophan (step 4) by hydrolysis.

An earlier reaction in the biosynthesis of tryptophan provides an interesting example of an electrophilic aromatic substitution reaction in which the final elimination step is a decarboxylation rather than a deprotonation. Notice that the electrophile is a ketone carbonyl (see also the problem below). 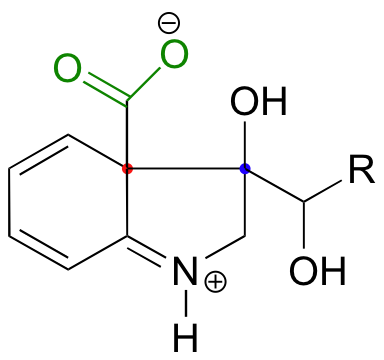 Template:ExampleStart
Exercise 15.7:  Generally, SEAr reactions require a powerful electrophile such as a carbocation.  The reaction above, however, has a relatively weak ketone electrophile.  What aspect of the reaction do you think compensates for this energetic disadvantage? (Entropic favorability of intramolecular reaction)
Template:ExampleEnd
Template:Soderberg