Compounds containing aromatic groups are widespread in nature, and for this reason chemists who aim to synthesize naturally occurring compounds in the laboratory often need to introduce substituents to aromatic rings. In the organic synthesis laboratory, electrophilic aromatic substitutions which result in the formation of new carbon-carbon bonds are called ‘Friedel-Crafts’  alkylations and acylations, named for Charles Friedel of France and James Crafts of the United States, who together developed the procedures in 1877.   The Friedel-Crafts reactions are an important part of a synthetic chemist's toolbox to this day.

Friedel Crafts reactions, like their biochemical counterparts, require reactive electrophiles with significant carbocation character.  One of the most common ways to alkylate an aromatic ring is to use an alkyl chloride electrophile that is activated by the addition of aluminum or iron trichloride.  The metal chloride serves as a Lewis acid, accepting electron density from the alkyl chloride.  This has the effect of magnifying the carbon-chlorine dipole, making the carbon end more electropositive - and thus more electrophilic – even to the point where the bond breaks and an ion-pair is formed.

This SN1-like SEAr condensation is mechanistically analogous to the enzymatic tryptophan-DMAPP transferase reaction we saw in section 15.5B.

An alternate method for carrying out a Friedel-Crafts alkylation is to start with an alkene, which is protonated by a strong acid such as H2SO4 to generate a carbocation.

Aromatic groups can be halogenated in electrophilic aromatic substitution reactions using  molecular bromine or chlorine in combination with metal Lewis acid reagents such as AlCl3, FeCl3, or FeBr3.

Just as in the Friedel crafts alkylation reaction the metal serves to polarize the halogen-halogen bond, thus creating a better electrophile.

15.6B: Ring-directing effects in Friedel-Crafts reactions 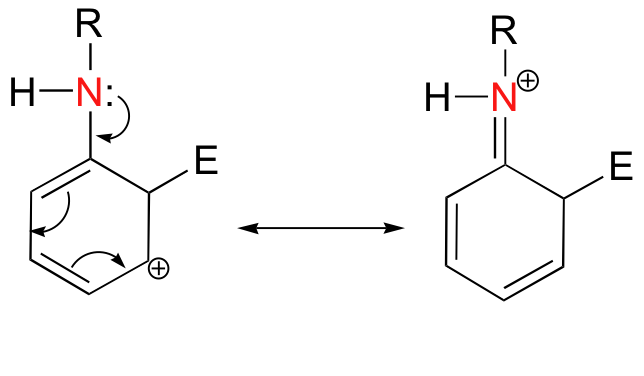 Other ring-activating groups are shown below (in these figures, the R group can be a hydrogen).  All of these groups are able, in varying degrees, to stabilize the carbocation intermediate in an electrophilic aromatic substitution reaction. Notice that plain old alkyl groups are also (weakly) ring-activating.

Substituent groups that are ring-activating due to resonance effects also tend to exert a strong regiochemical influence on further substitution reactions.   Specifically, substitution tends to occur in the ortho and para positions relative to the existing group. This is known as the ortho-para directing effect.  The effect can be explained by drawing resonance contributors for the carbocation intermediate of the SEAr reaction: the positive charge is in position to be delocalized by resonance only in reactions leading to ortho or para substitution. The carbocation which leads to the meta-substituted product, however, cannot be stabilized by resonance with the ring-activating group:

In addition, the para product would be expected to be preferred over the ortho product, due to steric considerations.

Electron-withdrawing substituents on an aromatic ring are ring-deactivating, making it harder for further substitution reactions to occur. These are mostly carbonyl-containing groups, as well as alkyl halides. When substitution does occur on an aromatic ring with deactivating group already attached, it tends to occur specifically at the meta position - deactivating groups are generally meta-directing.  The exception to this rule is the halides, which are ring-deactivating but ortho-para directing.  You will get a chance to design some syntheses involving Friedel-Craft reactions and associated ring-directing effects in the end-of-chapter problems.

As a final note, if you look back at section 15.5B, you will notice that all of the enzymatic SEAr reactions discussed there took  place on aromatic rings with heteroatom-containing ring-activating groups, and that the positive charges on the reaction intermediates were always positioned so that they could be delocalized to the heteroatom.  Nature likes to make things easy whenever possible!